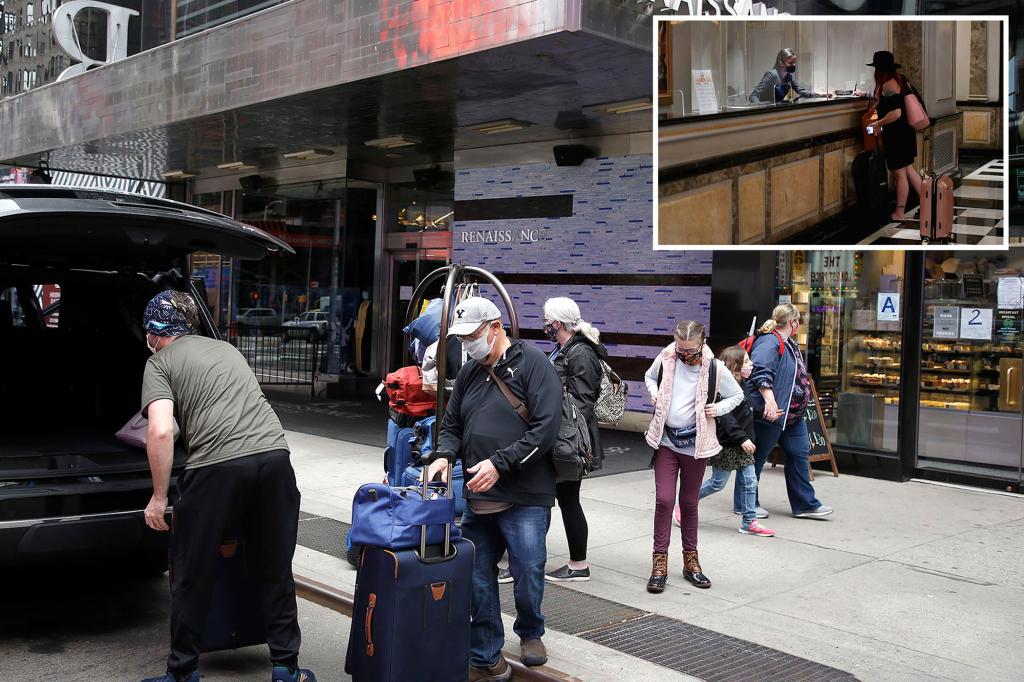 New York’s world-renowned hotel and tourism industry has a steep climb to bounce back to its pre-pandemic glory days — with hotel business travel revenue expected to be 55% lower in the Big Apple market this year than in 2019, a sobering new industry analysis reveals.

The report by the American Hotel & Lodging Association and Kalibri Labs says hotel business travel revenue across the US in 2022 is projected to be 23% below pre-pandemic levels, ending the year down more than $20 billion compared to 2019.

These projections come after hotels lost an estimated $108 billion in business travel revenue during 2020 and 2021 combined.

Other urban hotel-tourism markets still suffering from the COVID-19 blues include Washington, DC, where business is projected to be 54% lower, Chicago 49%, Boston 47% and New Orleans 32% below 2019 levels.

The New York state hotel business travel market as a whole is also a laggard, with revenue expected to be 46% lower than 2019.

That’s the second-worst recovery of any state other than Wyoming, where revenue will be 63% behind 2019, according to the survey.

“While dwindling COVID-19 case counts and relaxed CDC guidelines are providing a sense of optimism for reigniting travel, this report underscores how tough it will be for many hotels and hotel employees to recover from years of lost revenue,” said Chip Rogers, president and CEO of AHLA.

“The good news is that after two years of virtual work arrangements, Americans recognize the unmatched value of face-to-face meetings and say they are ready to start getting back on the road for business travel.”

The COVID outbreaks in 2020 and 2021 led to shutdowns and disruptions in travel and the ongoing upheaval and slow recovery could deprive city coffers of potentially billions of dollars in revenues that help pay for public services, such as policing and schools.

New York City hosted a record-breaking 66.6 million visitors in 2019 with its museums, nightlife and theater, restaurants, trade shows and sporting events such as the marathon and US Open tennis tournament.

But that figure plummeted 67% to 22.3 million visitors during the COVID-19 outbreak the following year, according to the state comptroller’s office.

Tourism-related tax revenue accounted for 59% of the city’s $2 billion decline in tax collections during the first year of the pandemic, plummeting by about $1.2 billion.

“We estimate that the hotel-related occupancy & sales tax that the City lost in 2020 was approximately $920 million and $560 million in 2021,” Vijay Dandapani, president and CEO of the New York City Hotel Association, told The Post.

“Many of those are good union-paying jobs,” said Dandapani.

Pre-pandemic, tourism accounted for 7.2% of total private sector employment in the Big Apple and 4.5% of private-sector wages. Tourism indirectly supported 376,800 jobs in 2019, according to the comptroller’s office.

Dandapani of the New York City Hotel Association confirmed that both occupancy and rates per room are still way down from pre-pandemic levels.

“New York City hotel jobs are still over 30% below 2019 levels principally because both occupancy and rate have not recovered,” said Dandapani.

“The principal reasons are a lack of revival of business travel where the average rate is nearly two times that of a tourist guest with a longer duration of stay,” he said.

But Dandapani complained the government has been part of the problem, not the solution.

“Another reason is the federal government’s continued insistence of a 24-hour COVID test (despite a vaccination requirement) for anyone entering the US, which is a big disincentive for foreign business and tourist travel,” he said.

Last fall, Hochul steered a chunk of her $450 million tourism revival program for New York into ramping up employment at the city’s 300 hotels — which employed some 50,000 workers pre-pandemic.

The plan included a $100 million Tourism Worker Recovery Fund, which earmarked a one-time payment of $2,750 to up to 36,000 hotel workers and other tourism industry workers who were eligible for expired unemployment benefits.

Another $100 million is aimed at spurring hotels and other tourism-reliant businesses that suffered job and revenue losses to rehire workers by offering $5,000 grants to subsidize each full-time worker added to the payroll and $2,500 for part-time workers.

The head of the union representing hotel workers remained optimistic the tourism industry will eventually mount a comeback.

“Even after two years, we still have thousands of hotel workers on layoff because of the slow return of business travel. But we’re finally starting to see things trending in the right direction and we are hopeful that we will be back to pre-pandemic levels in the near term,” said Hotel Trades Council president Rick Maroko.