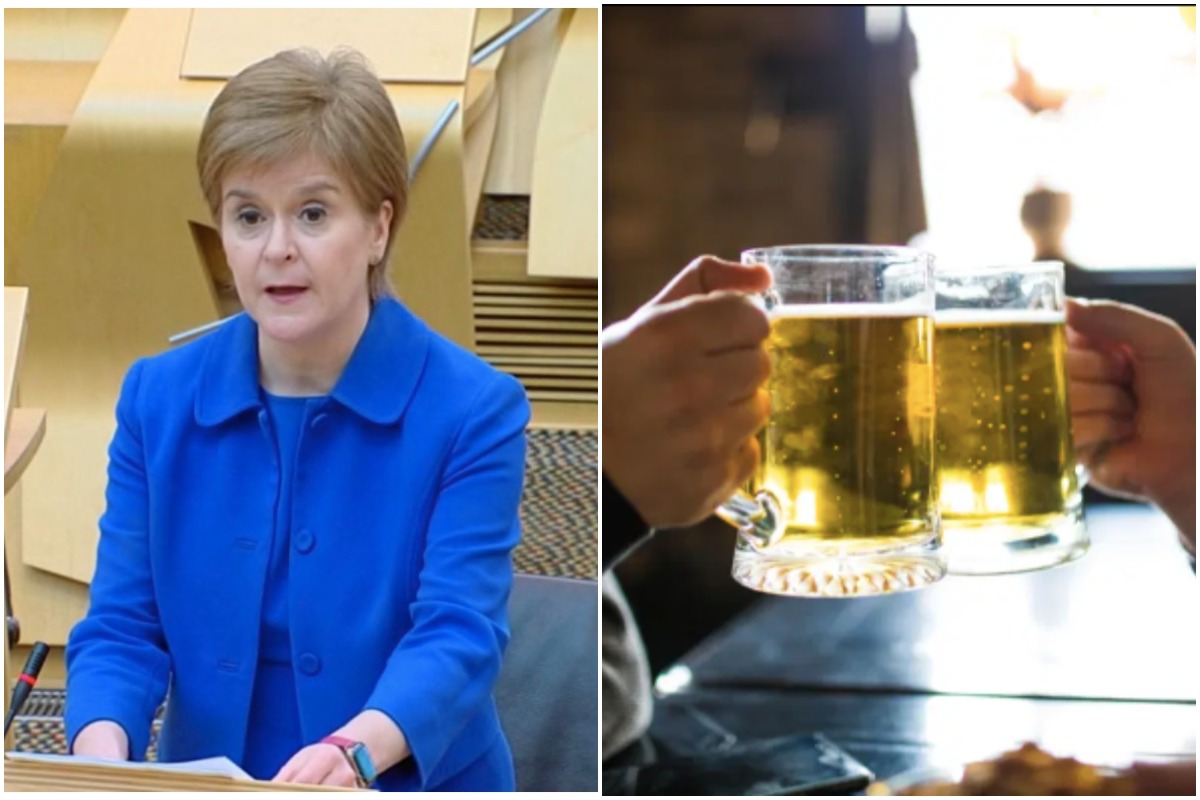 PUB bosses have hit out at Nicola Sturgeon’s lockdown lifting plans and said they’re “bitterly disappointed” with the route map.

Speaking earlier at Holyrood, Ms Sturgeon said from April 26 pubs, restaurants and cafes will be allowed to serve people outdoors, in groups of up to six from three households, until 10pm from 26 April.

However, licensed premises won’t be allowed to open to customers indoors until May 17.

Hospitality venues will be allowed to open until 10.30pm indoors, with alcohol permitted, and until 10pm outdoors, but pub bosses say many bars won’t bother reopening.

The Scottish Licensed Trade Association (SLTA) and the Campaign for Real Ale (CAMRA) are frustrated at pubs, restaurants and cafes being allowed to reopen next month, but will not be permitted to serve alcohol indoors.

An SLTA spokesperson said: “The SLTA (Scottish Licensed Trade Association) has expressed bitter disappointment after today’s announcement by First Minister Nicola Sturgeon that bars, restaurants and cafés will not be able to serve alcohol indoors when the licensed hospitality industry reopens next month.”

Mr Wilkinson said: “This is not the news we were hoping for. Yes, it’s good news for those bars, restaurants and cafés with suitable facilities who will be able to serve people outdoors – in groups of up to six from three households – until 10pm from 26 April.

“However, for indoor hospitality, today’s news is yet another bitter blow and we are surprised that the Scottish Government has chosen not to allow premises to sell alcohol when they reopen next month.

“We of course welcome the news that from 17 May, hospitality venues will be able to open until 10.30pm indoors with alcohol permitted and, for outdoors, until 10pm.

“We welcome these indicative dates for reopening as they provide more clarity for businesses but overall, these slight lifting of restrictions don’t go far enough and, for the majority, reopening will remain unviable. We’re bitterly disappointed.”

He said: “Restrictions will continue into June and beyond, leading businesses further into debt.

“The typical small hospitality business has taken on between £60,000 and £90,000 in bank debt and deferred bills as of February this year just to survive Covid – and the debt is rising with every week of low or no income.”

Director Joe Crawford said a ban on serving alcohol indoors when premises reopen is “devastating” and he believes many businesses won’t reopen under the “draconian restrictions”.

Mr Crawford said: “Pub goers, licensees and brewers will be disappointed to see our pubs being treated unfairly compared to similar businesses like cafés and non-essential retail.

“The return of curfews and a ban on alcohol being consumed indoors is devastating news for the industry which is looking to reopen Covid-secure venues so that people can socialise safely. For many businesses it just won’t be worthwhile opening back up as they won’t be able to turn a profit under these draconian restrictions.”

Chief executive of the Scottish Beer & Pub Association, Emma McClarkin, said: “Scotland’s pubs have been desperately waiting for some positive news, and today’s announcement is definitely a step in the right direction, but many hospitality businesses will be left disappointed. No alcohol service indoors and closure at 8pm makes trading entirely unviable for many businesses, meaning the earliest they will be able to open is 17 May.

“Today’s announcement gives some hope, especially the expectation of mainland Scotland moving forward collectively but it still falls short on what many pubs and bars require.

Group spokesperon for the Scottish Hospitality Group, Stephen Montgomery, said: “It’s impossible to get excited about this partial and gradual reopening, but at least we have some dates and a path towards normality.

“Hospitality played no part in the second wave and the government recently confirmed it had no evidence to justify the restrictions on the sector. Despite that, the government is persisting with two fundamental flaws in its approach to easing restrictions.

However, Ms Sturgeon’s announcement struck a happier chord with retail and tourism chiefs.

Under the new plans, more retailers, including click-and-collect services, garden centres, car dealerships, homeware and electrical repair stores and barbers and hairdressers, will also be able to reopen from April 5.

Groups representing retail and tourism businesses have welcomed clarity from the Scottish Government on the easing of restrictions in Scotland.

Marc Crothall, the chief executive of the Scottish Tourism Alliance, said: “The First Minister’s announcement of an indicative timeline for the phased reopening of our tourism and hospitality sector will be massively welcomed by the sector today; it is the most positive news we have received in a long time.”

He added: “Today’s announcement will offer some very much needed light at the end of what has been the darkest tunnel for our industry.”

Fiona Campbell, the chief executive of the Association of Scotland’s Self Caterers, added that she believes the plans “strike the correct balance between the needs of business, the desire across the country for increased normality, and the caution that we all have to continue to observe as we work together to beat Covid-19”.

Scottish Retail Consortium director, David Lonsdale, also welcomed the news, saying: “Credit is due to government for listening to the representations from retail.

“This announcement provides much-needed certainty to the industry, and it’s welcome to see moves to unwind a number of the elevated lockdown restrictions which were implemented at the turn of the year.”

All of Scotland to be in lockdown Level 0 by end of JUNE, hopes Sturgeon

WE’LL DRINK TO THAT!

In response to Ms Sturgeon’s announcement of a “restart grant” in April to help businesses reopen, Andrew McRae, the Scotland policy chairman of the Federation of Small Businesses, said there needed to be ongoing support after the lifting of restrictions.

He said: “New Scottish Government restart grants are incredibly welcome, but that can’t be the end of efforts to help independent operators both make it to the summer and eventually recover from this crisis.

“While we should cheer the prospect of the end of lockdown, we need more action to help our local businesses deal with its long-term consequences.”