What will London’s Oxford Street look like after the pandemic? 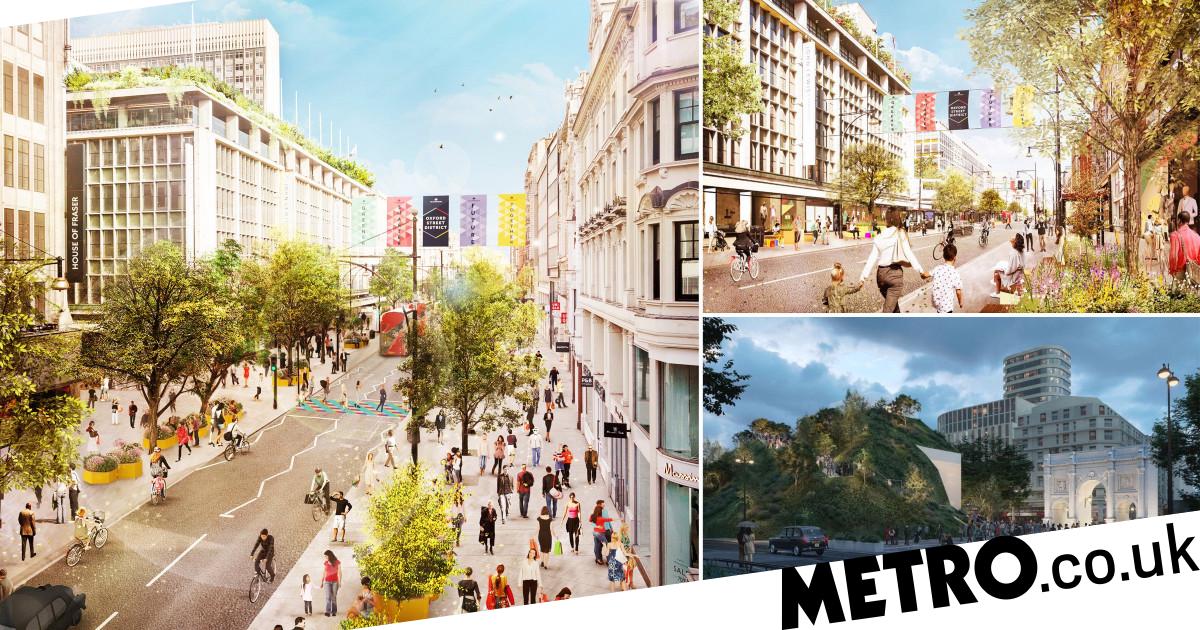 Shoppers are being given a vision of London’s ‘born again’ Oxford Street under a drive to prepare it for life after the pandemic.

The iconic shopping row is the ‘critical’ lynchpin of the West End’s commercial district, attracting around 200million visitors a year and generating £10billion before the pandemic struck.

The lockdowns, Covid restrictions and existing pressures such as changing shopping habits have had a ‘catastrophic’ impact on the churning thoroughfare, with an 80{540ccc4681f92a8237c705b0cdebbb9da373ec200da159e6cc1fd9f393be00be} drop in footfall during the health crisis.

John Lewis, whose flagship store is at No300, became the latest of Britain’s department stores to buckle this month when it announced that not all of its 42 branches will reopen when non-essential shopping resumes on April 12.

However, a £150million transformation project is afoot to create more space on the notoriously claustrophobic, heaving pavements, with a more rounded mix of entertainment, open spaces and retail.

The 18-month pilot is intended to be the first-phase of a longer strategy to reposition the street as a world-leading destination.

At Marble Arch, a hollowed-out ‘hill’ with a viewing platform is being created by world-renowned architects MVRDV, with the intention of providing a scenic link between Oxford Street and Hyde Park.

Crossrail, now known as the Elizabeth Line, is due to begin running passenger services in 2022, with three sites in the West End a few seconds from Oxford Street.

Jace Tyrrell, Chief Executive of the New West End Company, which represents 600 businesses in the district, told Metro.co.uk he is confident the street can overcome an £8billion hit on trade in the area since the outset of the pandemic.

‘For years, Londoners and UK customers have been falling out of love with Oxford Street, they were enduring it but they weren’t enjoying it,’ he said.

‘We were heavily reliant on international visitors and we were already thinking about how to transform it.

‘Before the pandemic we had been in intense conversations with the council about space and congestion and the general environment of Oxford Street.

‘Retail was already changing pre-Covid and we were looking at how we could change the planning and licensing policy to make sure it is fit for purpose and the businesses we want to attract in future.

‘The £150million is going to be spent by the council improving the public realm and transport with some improvements ready for April and it’s end-to-end, from Centrepoint all the way to Marble Arch.

‘Another thing is Crossrail, which has been promised for four years, but it’s such a game-changer

‘We are also thinking about one-offs and temporary themes welcoming people back to the nation’s high street.

‘It’s taken Covid to accelerate all the issues and I’ve never seen such a spirit to transform the nation’s high street.’

The mecca for flagship stores is now being refashioned into what the council say will be a ‘world-leading’ visitor destination in a turnaround that it’s hoped will symbolise the revival of high streets across the UK.

Mr Tyrrell said: ‘In terms of the legalities, the Covid rules are due to end on June 21 but the high percentage of space and emphasis on hygiene will be part of life, much like you see in Asia. It will be a lot more fully immersed, for example instead of holding a shirt up to the mirror in the changing rooms, customers will be able to design and tailor products online before they buy.’

Lee Lucas, principal and chief executive of the Fashion Retail Academy, believes that shoppers are accustomed to two-metre rules and hand sanitising.

Mr Lucas said: ‘Oxford Street will be born again when stores reopen as the novelty of buying in person drives millions of people back to the shops.

‘Not only will the reopening coincide with the usual pre-summer buying spree, consumers have been starved of leisure activities and this retail paradise is already showing signs it is pivoting towards being far more than just a shopping destination.

‘Oxford Street will remain one of the UK’s hottest shopping destinations but it will be so much more than that. Consumers are going to head there for the ultimate day out, combining shopping with eating out and activities like crazy golf, which has already replaced a major retail unit.

‘Footfall may take time to fully recover but plenty of consumers can’t wait to head into central London and have become so accustomed to social distancing measures that they will barely notice them.’

Director Marc Von Grundherr told Metro.co.uk: ‘Oxford Street is arguably the nation’s high street and while it benefits from a huge footfall due to tourism, many other high streets and retailers could learn a thing or two.

‘The future of the high street relies on an experiential offering, something that goes above and beyond simply selling goods to consumers in order to entice them away from their online stores and into bricks and mortar stores.’

The company, which represents retailers, restaurateurs, hoteliers and property owners, is aiming to get back to the £10billion spend within four years, safeguarding a district which it says employs one in 10 Londoners and returns £1billion in business rates.

‘The big challenge is what we do with the units that need to be filled,’ Mr Tyrrell said.

‘There is billions of pounds of development coming in the next three years and there’s loads of appetite from non-retailers looking at Oxford Street; think sport, think entertainment, think totally different concepts you would see in Singapore, South Korea or other international destinations.

‘The past twelve months have been catastrophic for Oxford Street, even in the two world wars we didn’t experience this impact on trade in the area.

‘The Government support has been a lifeline and a lot of businesses, although not all, are very, very sustainable, the hotels, the restaurants, the retailers, so it’s important we give them a future.

‘There is an upbeat tone as we head towards the reopening and there is a lot of pent-up demand with a lot of household cash which we expect to see being spent back in the West End when we get our customers back this summer to a very different feel.’

On the ground, Noam has been ‘scratching for customers’ at his fresh falafel kiosk without the usual sea of shoppers.

‘It’s been very slow, the winter was pretty cold so when there’s miserable weather and it’s snowing, with no shops open, there’s really no reason for people to come here,’ he said. ‘It’s challenging and we’ve been left scratching for customers, but the last man standing is the person who wins.’

The Oxford Street Falafel Stall is trading from a small green kiosk at a junction with Wells Street.

Noam, who asked to be known by his first name, gave a cautious welcome to the vaunted regeneration plans.

He said: ‘It’s a matter of personalities so I am optimistic and I think people will figure out a way to solve or not to solve the problems.

‘It might be a trade-off, with a lot of stores being shut and a lot of companies going and the street changing its character.

‘It might be somewhere a bit more fun to be, somewhere that’s a bit more about the experience rather than just shopping.’ 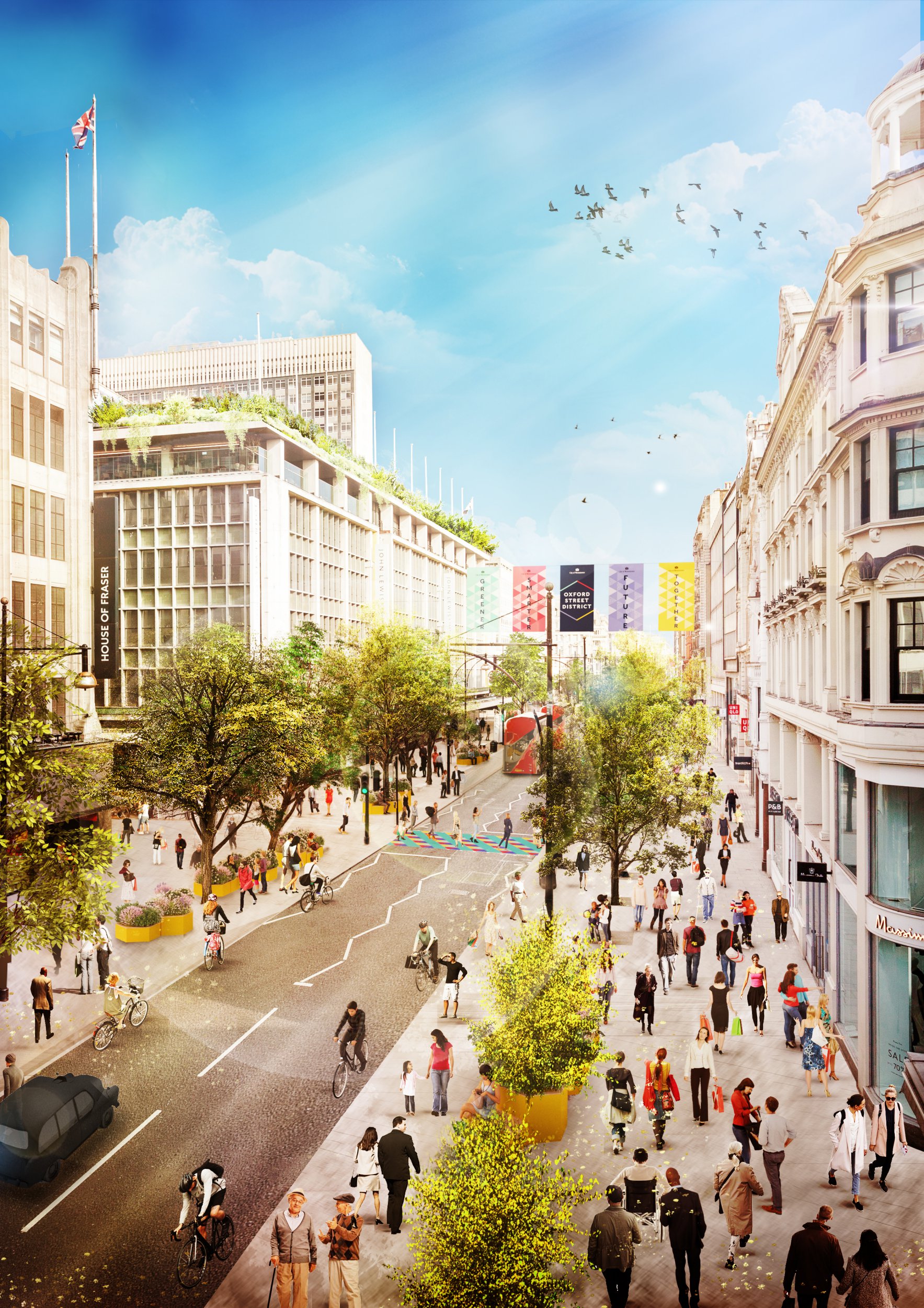 Cllr Rachael Robathan, Leader of Westminster City Council, is under no illusions about the importance of Oxford Street lasting out the crisis.

Cllr Robathan said: ‘It is critical that we act urgently to restore confidence in the nation’s favourite shopping district.

‘These initial measures, which should be completed in time for summer, will literally pave the way for an economic recovery.

‘They will create a new visitor-friendly environment and reinforce the area as one of the best places in the world to live, work, shop and visit.

‘This is just the start. Our framework lays out a plan for the successful long-term future for the nation’s high street as the greenest, smartest, most sustainable district of its kind anywhere in the world.’

Get in touch with our news team by emailing us at [email protected].

For more stories like this, check our news page.

Get your need-to-know
latest news, feel-good stories, analysis and more